"According to several prophecies, religious beliefs and scientific studies, the world as we know it will end on December 21st 2012."

The idea behind Project 2012 is to use this theme to reflect on the way our society is leading towards. Wars, famines, global economic crisis and natural disasters are on the news on a daily basis threatening to bring our societies to a total collapse.
The countdown has begun and Part II is now on its way. We are now looking for new artists to create a second story.
Ten Artists from England, Spain, France and Israel shared their interpretation and contributed to Project 2012’s Part I exhibition which took place at Ground Floor left Gallery between October 5th/9th 2011. The artworks displayed created a narrative of the end of the world as we know it transforming into a rebirth of a different reality

How to apply
Email us:

- Your CV or resume.
- A brief statement (No more than 400 words) of the idea you would like to present.

- Link to your website (if you have one).
- If selected, there will be a charge of £12 administration fee payable via Paypal to the following email: project2012exhibition@gmail.com (Please note: this fee is non refundable).
- There is a further charge of £15 per piece(we accept a maximum of 4) payable on reception of the work.
Please note that this money goes towards promoting the show (printing catalogues, flyers and posters), video and photography.
Every artist will receive confirmation of payment and email reception.
Deadline/31st of January 2012. Selected artists will be announced on 3rd of February.

Exhibiting space: The Gallery on the Corner in 155 Battersea Park road, SW8 4BU
Project 2012 is an itinerant exhibition around London. There will be 4 shows, one week long, per season (Autumn 2011/Winter 2011/Spring 2012/ Autumn 2012) and the Grand Finale on 21/12/12 which  will gather all the artists who have taken part of the previous shows.
All the selected artists will, therefore, have two shows over a period of two weeks.
We look forward to hearing from you.
Project 2012 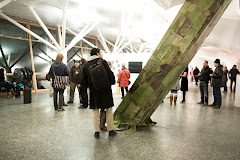